Two Pears: Discovering the Story
Micro bites # 5-16: (15 minutes for each micro bite. These may spread over the course of one day or a week.  It may even need to take a month or so in order to do research, etc.)
1-Discuss story creation: What makes a good story . . . good story structure.  Make it a quick chat to bring these concepts to their mind:  Setting, character, plot, beginning, middle and end, etc.
2-Talk with the class about settings that would be interesting for their opera:  discuss settings that might tie into subjects they have been studying.  Make a list.
3-Ask the class to decide what setting they would like, where the opera to should be.  Take a vote if necessary.
4-Have the class make a list of characters that could be involved with the decided setting.
5- Have the class Synthesize the list.  Have the class make connections with the characters by placing them in groups. Example: Princesses, princes, and knights are the “royalty” group, whales, dolphins and fish are the “ocean” group and aliens, robots and scientists are the “space” group. If your class discovers two or three clear groups there is no need to vote, but if they have more than three character groups listed you will need to have the class vote on which characters groups to include in the opera.  You could vote at this point or save it for another micro bite.
6-Have the class make a list of generic problems: that protagonists (heroes) and antagonists (villains) or (hero verses hero) need to overcome problems of good versus evil or problems such as: characters verses nature / characters verses machine (or their society creations)/ characters verses other characters / characters verses fate/ characters verses themselves (a problem they created)/ characters caught in the middle of a situation they must resolve/ characters seeking understanding . . . etc. Characters may be anything from animals, humans, aliens, and royalty to inanimate objects like rocks, volcanoes, bubbles, snowflakes or imaginary creatures. It does not matter what type of characters they have developed one of these generic problem scenarios should work.  They may explore some of these types with a little detail but do not attach it to a specific character, even if they do . . . write it down without those specifics.
7- Vote on the problem for the opera!
8- Write the first sentence as a class introducing the Characters that are involved in the action at the beginning of the opera, what it is they are doing to show how they are interacting and proceeding normally UNTIL the problem happens or is discovered.
9-Write the second sentence as a class! What is done to overcome the problem? Why doesn’t it work? [BUT]
10-Write the third sentence as a class! What is done to overcome the problem? Why doesn’t it work? [BUT]
11-Write the fourth sentence as a class! What is done to overcome the problem? Why does it work? [AND]
****A different micro bite approach for the second, third and fourth sentence creation:  divide the class into three groups (may want parent volunteers to help) and have each group write the details for one of the sentences and then share with the class.  Many mentors have incorporated this technique for the sake of time and greater individual involvement.  I like Dr. Dave’s term for these groups “Think Tanks”.  I have called them “Buzz Banks”.  “Becauzzz”. . . there’s lots of noise attached to these groups which usually means they are on task.  If they are quiet and disjointed they need a bit of guidance to direct their thinking with those ever important questions!!!  All adults working on the process should be informed on OBC philosophy and facilitation techniques before they begin to work with the students.
12- The whole class creates the fifth sentence (together): making note of the lesson they would like to ensure the audience understands that the characters in the opera learned and to establish a new normal way of living.
13-review all five sentences and edit for flow and understandability!
Micro notes about the story creation process micro bites: WOW!!!  It only takes a maximum of 13 micro bites to write the story!  You can weave this throughout the first month of school.  You can weave it through a week.
Make this step easier . . . Don’t try to write the story in one day.  Don’t try to write the story with your class in one hour. You are tied to doing that more when you have a drama mentor’s help, but that is not the ideal way to explore the story to build community with your class and encourage individual involvement with each student.  Use tools such as your name sticks, small groups, throw a bean bag or other ‘cool’ object to indicate who the speaker is so all voices are heard. Use the opera journal as a tool to record thoughts as the process progresses. Use it as a reference as details are added. Don’t drag the process of story creation on too long or the enthusiasm for the project will wane. Keep sessions close enough together that interest and consistency remain intact.

1-Micro Bite: Play the “Slap, Slap, Clap, Snap” game in the Theatre Games Section (page 21) to recognize rhythms.
2- Micro Bite: Sing Action songs.
2- First libretto creation micro bite: share the tools and terms of Opera:
Opera: “Great Work”
Libretto: Little Book= “words that the actors are to act or sing”!
Three ways to use words to create a libretto:
1)     Action= the words to Act write in parentheses/
2)     Song: song has structure, rhythm, beat, can rhyme, melody, chorus, repeating melodies and/or words.  Songs STOP action and communicate: NEEDS, EMOTIONS, WANTS and Underlying Beliefs (what we think but do not usually share aloud to others) =NEWUBS
3)     Recitative (Recit): “conversation that the performers sing as if they were spoken.” Not as much structure as songs and they only move the opera to the next action or song.
Review importance of each tool:
The opera always begins with ACTION!  It is desirable to have lots of Action in opera.
Songs are memorable and communicate more in fewer words!  It is desirable to have lots of songs in opera.  It is desirable to repeat whole songs. They usually do stop action.
Only need a few lines of recitative.  Recit JUMP STARTS action again! 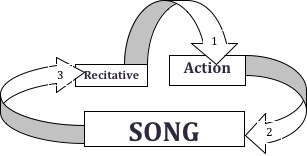